Most Successful Bank Robberies In History 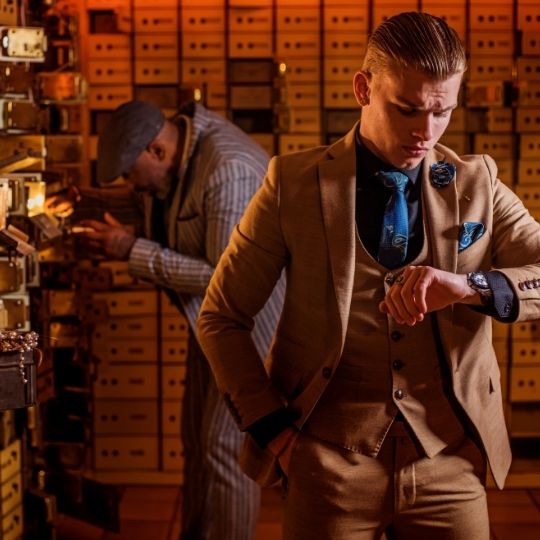 According to the FBI, there were nearly 4,000 bank robberies and burglaries in the US last year alone. However, despite the frequency, it’s rare that would-be bandits make off with much more than a few thousand bucks before getting swiftly apprehended. Of course, there are exceptions.

Here are 10 instances in which a combination of cunning, brute force, and luck have resulted in some truly astonishing heists.

Fortaleza, Brazil; 2005
Stolen: $70 million
After renting a commercial property in the middle of the city and posing as landscapers, the gang behind this enormous heist spent three months digging a 256-foot tunnel to a position beneath the bank. Then, over a weekend in August, they tunneled up through reinforced concrete into the vault of the Banco Central branch and managed to remove 3.5 tons of Brazilian real notes, much of which has never been recovered.

London, 1983
Stolen: £26 million ($41 million)
On an early morning in November, six robbers made their way into the Brink’s-MAT warehouse at Heathrow Airport with help from a security guard who was in on the job. Their original plan involved taking just the £3 million in cash thought to be under lock and key, but that changed once they discovered an additional three tons o

f gold bullion and diamonds, signif
icantly padding their planned payday. Several subsequent murders have been linked to the case, and while much of the gang involved has since been convicted, the gold has never been
recovered.

Kent, UK; 2006
Stolen: £53.1 million ($83 million)
This brazen heist remains the largest cash robbery in British history and was executed with a more violent vision than most others on this list. After posing as police and kidnapping both the Securitas branch manager and his family, the heavily armed gang of thieves brought him to the depot where they then bound his 14 employees and forced him to open the cash cages. Most of the crew (which included one of the world’s foremost cage fighters) was later caught and convicted, although at least one is said to be living off the loot as a free man in the West Indies.

Belfast, UK; 2004
Stolen: £26.5 million ($41 million)
Days before Christmas, a gang of robbers posing as officials coaxed their way into the homes of two of the bank branch managers, holding them and their families at gunpoint. The following day, as their families remained under threat, the managers were instructed to head to work as normal, and told to let the robbers in at the end of business hours. Once they looted the place, the thieves released the families unharmed. Many have speculated that the whole thing was the work of the Provisional IRA or Sinn Fein, but as of today the crime remains unsolved.

Baghdad, Iraq; 2003
Stolen: Over $920 million
Considered the biggest bank heist in history, this bold theft was allegedly ordered directly by Saddam Hussein himself just days before the American invasion. Reports suggest that following the crime, a note signed by Hussein surfaced, instructing that $920 million be withdrawn by the bank and given it to his son Qusay, who reportedly spent the better part of five hours with another unknown individual loading the heaps of money into vehicles to an undisclosed location. Today, it’s unclear how much of the total missing cash has been recovered, but it’s believed that at least $650 million was discovered in one of Hussein’s palaces during a raid.

Beirut, Lebanon; 1976
Stolen: $20-50 million
In the heat of Lebanon’s civil war, a group associated with the Palestinian Liberation Organization blasted through the bank’s walls through a church next door and hired a crack team of locksmiths to bust open the vault. Once finished, they reportedly walked away with up to $50 million worth of gold, cash, stocks, and jewels.

London; 1987
Stolen: £62 million ($97 million)
Perpetrated by Italian playboy and career criminal Valerio Viccei—who was implicated in over 50 different bank robberies during his lifetime—the execution of this operation was surprisingly simple. After entering the bank during business hours under the guise of opening a safety deposit box, he and his armed accomplice “subdued” the manager and security guards, freeing them up to let in more accomplices to help bust open as much of the vault as possible. Eventually, they walked out with at least £62 million in cash, jewelry, and other valuables. Viccei enjoyed a brief period of freedom by fleeing to South America, only to be intercepted by British authorities and jailed when he came back to visit England in order to retrieve and ship his Ferrari Testarossa.

Baghdad, Iraq; 2007
Stolen: $282 million
While many of the details related to this major robbery of mostly American cash remain shrouded in mystery, the Iraqi Interior Minister did reveal that the whole heist was engineered by a pair of guards who worked for the bank and were allegedly connected to militias roaming the region back in 2007.

Buckinghamshire, UK; 1963
Stolen: £.2.6 million ($4.1 million)
This finely orchestrated operation to intercept a Royal Mail train full of high-value packages (en route from Glasgow) was devised over the course of several months. A gang of 15 robbers hatched and executed the now-legendary plan, which involved rigging the trackside signals to stop the train in a remote location, where the conductor was overpowered and the loot was stolen. Unsurprisingly, it’s served as the inspiration for a whole crop of films and books since.

Los Angeles; 1997
Stolen: $18.9 million
The largest cash robbery to have ever occurred in the US also happened be an inside job. The mastermind was a regional safety inspector for Dunbar who recruited five of his childhood friends to ambush the guards at a stocked cash drop vault on a Friday night. Once they gained access to the loot, they loaded up a U-Haul and escaped, nearly getting away with the whole thing until one of the perpetrators got sloppy and eventually confessed.  However, to this day, more than half of the money remains unaccounted for.

The 20 Richest Criminals in the World
Array

One of the Most Ridiculous Divorce Cases

The first subway ride Not...